The tribe has been given access to the internet and Google Earth to help protect their territory from illegal miners and loggers. With the use of GPS devices, video and photo cameras the Surui people plan to manage and maintain 600,000 acres of forest. It is estimated that 17,300 acres have already been lost to illegal loggers. This deforested area will be reforested and the progress will be documented by the tribe using the new technology.

The tribe hopes to tell the world about the culture and traditions though the use of photos and video all geographically positioned so the data can be displayed as a layer on Google Earth. Users will be able to navigate through the forest and see the life of one of the most isolated people in the world.

The Surui tribe first made contact with Europeans in 1960. This resulted in two thirds of the tribe being killed by a flu epidemic, reducing the population from 126 to 40 people. In 1997 the population was recorded to be 185. The location of the Surui tribe is shown in the map below, indicated by the red spot. 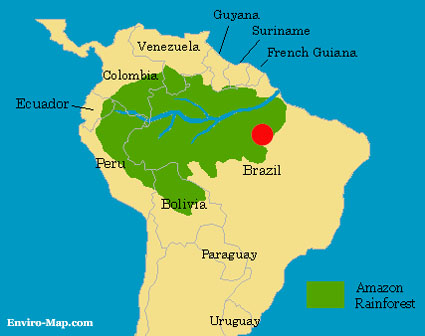